Well today went as well as could be expected. Gareth and I felt we were as prepared as we would ever be to take the exam (70-515) and decided to take it in the afternoon. We are a day ahead on the course and ideally would have sat the exam on Tuesday, but for some reason the test centre was closed on Tuesday so we decided to bite the bullet and go for it today.

What a relief. The exam questions came thick and fast but I felt very much on top of it. In fact, when I found out I had gotten 880 out of 1000 I was slightly disappointed. I honestly don't know what questions I got wrong. Never the less, 880 is a pass and that's all that really matters. 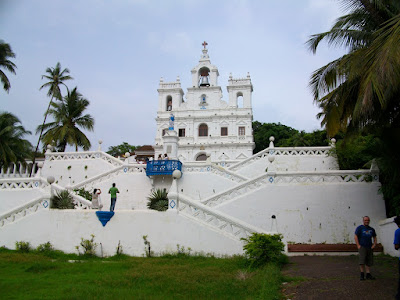 We headed back to the apartments early as we can start WCF tomorrow and we are still one day ahead of schedule. We picked up Marc and Ramu from the other apartments and headed out for the afternoon. We had a few (understatement) drinks in Hotel Fidalgo (I'm sure its Fandango) then headed back for dinner.

We picked up the almost everyone else after dinner and headed to the local hotel Vivanta for a drink. It was very fancy and very quiet but twice the price of hotel Fandango, still less than £2 for a beer though. After that we headed to the Marriott. It was a bit of a trek but we made it, hot and thirsty. The Marriott is a five star hotel and prices for beer are about the same as the UK, but again it was very quiet.

At this point a Gareth and Thomas threw in the towel and headed back to the apartments, but the rest of us soldiered on and headed to a bar we had heard of called Down the Road.

For some reason they don't have regular music here, instead they have people singing popular songs. In Down the Road it was a man and his wife taking turns. They were very good and had some songs by the Killers and Jason Mraz to name a few. This place was much better. For a Monday night it was pretty busy and we agreed that it is where we should go on Saturday night.

Tomorrow we try to tame the WCF beast. I'm sure I will come out of this one with a few scars but passing this first exam has helped a lot and we are going to give it all we've got.