My stomach is fine, thank you. Gareth and I went for a walk to find the supermarket after class. It's up to about 85% humidity today, according to MSN weather it's 30 degrees but feels like 39!

While trying to cross the main road a bus stopped to pick us up, so we sheepishly walked away. After about five minutes a gap opened up and we managed to sprint across the road with only a few mopeds having to toot and swerve. The locals look at us very strangely. I thought they would be used to seeing tourists around here but apparently not. A lot of them just stare at Gareth, which is a bit rude.

The traffic here is insane. There's no other way to describe it. Walking to the mall the sound of horns is pretty much non stop, they peep when they over take, when they approach pedestrians, when they pull out and pretty much whenever they feel like it. At least they drive on the left. Most of the time.

We found the shopping mall and a KFC. It's quite a walk, about as far as I was willing to go in this heat and humidity. I've noticed there are a lot of security guards around some buildings, our apartment has one at the gate and there is one in the reception area at Koenig. The mall was a different world, it had 3 or 4 security guards at the main entrance. To get inside we had to go through a metal detector and get scanned by a guard. There were several security guards inside and a man was standing at the top of every escalator. The shops were all very trendy looking and were priced to match. I bought some BBQ Pringles and a bunch of mini bananas. 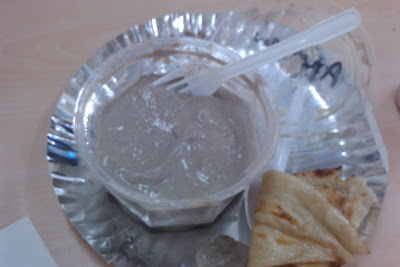 For lunch today I ordered chicken korma. I thought this would be a safer choice after the bag of grey slime I got yesterday. I have no idea how they do it but the chicken korma was even more grey than the chow mein and looked more like a tub of gruel. Fortunately it only tasted half as bad as it looked.