Getting here was fairly uneventful. The wait in Heathrow was made easier by a long lunch and couple of pints of Staropramen. The plane to was a 747 and for some reason was about 28 degrees inside. Thankfully the aircon kicked in once we were in the air and it cooled down to a more manageable heat. We had two seats at the very back of the plane so we didn't have to sit next to anyone else. In the nine hour flight I think I managed two, maybe two and a half hours sleep. Leaving the plane at Mumbai I thought I had walked through some sort of exhaust vent for the plane. I soon realised it was just the air. The temperature is around 30 degrees and humidity is a sticky 75%. When we got on the Goa flight, there was vapour pouring out from around the overhead luggage racks. I guess it was the dry air coming out of the air conditioning reacting with the humid air coming in through the door. 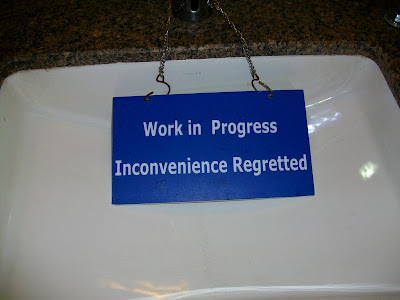 The apartment is pretty much what I expected. We have a room each and Gareth's room has an en-suite, so we have a bathroom each. The bedrooms have air conditioning which is pretty much essential for me as the heat doesn't go anywhere at night. We get our breakfast and dinner served in another apartment. It's in the same building but on a different block so we need to go down to the garage and back up a different elevator. The elevators have a sliding metal grate and can't work when it's opened, so they play a doorbell type of music to remind you to close it. Ours play "Home, sweet home" and one of the others plays "My heart will go on".

Day 1 of the course

We went for breakfast in the other apartment. Fried egg, hash brown and toast. It was quite good and a pretty normal thing to have for breakfast after yesterdays chicken fajita. When we got to the classroom we got started fairly quickly. It's only Gareth and me in the class. Our teacher had planned to do 8 modules today but as we are starting with quite basic stuff we got through them really quickly and managed to get 10 finished. Hopefully getting the extra work done today will mean we can have a bit more time on anything we struggle with later.

I ordered chow mein for lunch today because it was the only thing on the menu that looked remotely recognisable. It came in a foil wrapped bag which took 10 minutes to open, only to be greeted by a really slimey, grey, onion filled sauce (I'm not a big fan of onions). I tipped it onto the plate and found a massive pile of noodles at the bottom of the bag. The noodles were good.

It's still 30 degrees and it's still incredibly humid.